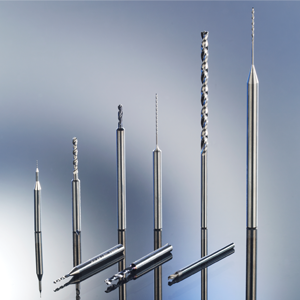 BC Instruments, Schomberg, ON, a manufacturer of precision components for aerospace, electronics, injection mould, life sciences and nuclear industries, recently learned the value of having tools in stock it could draw upon when needed.

The company was working on a prototype part for a customer that works in the life sciences industry when the customer contacted BC Instruments and asked for a change in the hole size.

“The customer asked us to reduce the hole size from .017 in. (0.43 mm) to .015 in. (0.38 mm) and this was an urgent requirement,” recalls Mark Crosby, sub section manager for BC Instruments. “We had some Sphinx drills in stock. We tried them and they worked well, so we continued to use them in production.”

The BIG KAISER Sphinx drill series includes more than 2,000 different drills under 3 mm in diameter as standard. With a range of 0.05 to 3 mm diameters in fine increments of 0.01 mm, BIG KAISER is able to offer manufacturers exact diameters right off the shelf. The drills feature short deep hole drilling from 2xD to 16xD with coolant-through from 1 mm diameter. The series includes pilot drills and centre drills with “plus” tolerance for better starting conditions. A four-facet point geometry allows for freer cutting, according to BIG KAISER, preventing the drill from wandering and resulting in closer tolerances.

The Sphinx drill BC Instruments used on the prototype part and subsequently in production was a .39 mm Spirex drill made from high speed steel (HSS) containing 8 percent cobalt. The two fluted drill features a 118º point angle and a 25º helix angle. The company uses a Haas VF-3 VMC for its holemaking processes.

Since using the BIG KAISER drill in the part prototype and production, Crosby says the company has tried other HSS and carbide drills, “but none of them out-perform the Sphinx drill.”

Crosby says the challenge was the depth of the hole being drilled and holding position tolerance. Using the .39mm Sphinx drill, “we are holding a true position of .002 in. (0.0508 mm) across four holes in the same part.”

In addition to this, he says the company can now run 40 holes before it has to replace the drill “with no problems with positional tolerance.”

BC Instruments operates out of five facilities in Schomberg, ON, and employs 130 people. The company has been in operation since 1971.