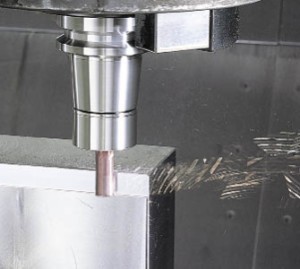 Toolholders with increased taper-to-taper contact, such as this Mega E collet chuck from BIG Daishowa, are useful for high-speed milling since they enable stable cutting.

Many machine shops lack objective criteria for making toolholder purchasing decisions. They say every tooling manufacturer claims high accuracy, perfect balance and large clamping forces. With so many choices and little to distinguish one toolholder from the next, most purchasing decisions are made by price alone.

However, using this criteria overlooks the critical effect that runout has on machining accuracy and tool life. Many machine shops and parts manufacturers are not aware they can improve runout significantly by using the right toolholders.

Two important variables in determining acceptable runout are tool size and composition. With tools 3⁄4 " in diameter or larger, runout of 0.0005 " may not impair performance and tool life. However, with smaller tools runout may need to be much better than 0.0005 ".

Tool materials are also critical. For example, solid-carbide drills can last much longer than HSS drills—but only if runout is tightly controlled.

Our company conducted an informal customer survey by asking, “What is good runout?” The consensus was that good runout is 0.0005 ". We decided to evaluate this benchmark using tests of various cutting tools. Figure 1 shows data from drilling tests performed at the BIG Daishowa Mega Technical Center in Awaji, Japan. Each drill was tested under the same conditions, with only runout changed for each value.

A 3mm-dia., solid-carbide drill with 0.00008 " of runout produced 148 holes at 3 times diameter until the primary cutting edge experienced 0.008 " of wear, at which point tool life was considered to be over. A second 3mm-dia. carbide drill with 0.0002 " of runout under the same conditions produced just 125 holes using the same tool life measurement. The test was repeated two more times with runouts of 0.0004 " and 0.0006 ", with a decrease in tool life as runout increased.

To summarize the results:

• Carbide has the highest sensitivity to diminished tool life due to runout. Improving runout from 0.0006 " to 0.00008 " tripled tool life of the solid-carbide drill. Keep in mind that tool users in our survey considered 0.0005 " runout to be acceptable on average.

If a drill does not run concentric to its centerline, higher forces are generated in the radial direction of the highest margin, causing more wear on one side.

Many shops use toolholders, such as 3-jaw drill chucks, that allow drill runout to exceed 0.001 ". Extrapolating from our test data, a solid-carbide drill with runout of 0.001 " would produce fewer than 25 holes. A higher-quality chuck, though more expensive, could improve tool life dramatically.

BIG Daishowa ran similar tests to calculate values for a 4-flute, 10mm-dia. carbide endmill. Cutting length increased from 528 ' to 693 ', 1.3 times longer, as runout decreased from 0.0006 " to 0.00008 ". The reason is clear: With runout of only 0.00008 ", the cutting forces are evenly distributed on each flute, whereas with runout of 0.0006 ", an excessive force will be applied to only one flute. Less runout helps stabilize the cutting depth on each flute and produces a finer surface finish.

Allowable TIR should be based on different values for tools of different diameters. Figure 4 shows the constant relationship between tool diameter and runout as a function of chip load. The data is based on 0.0005 " TIR as a starting point for a ½ "-dia. tool, from which the allowable TIR can be calculated for smaller tools and their respective chip loads. For example, if a 1⁄16 " endmill with three flutes is profiling mold steel, the effective chip load is 0.0002 ipt, which means the tool will be unbalanced when runout is 0.0005 ".

Even the best collet chuck cannot deliver superior performance in an old or worn spindle. Shops should check their spindles regularly for runout using a precision gage bar. One popular gage is a simple straight bar used by slowly rotating the spindle and measuring runout with an indicator.

A dynamic runout gage typically has a precise point for accurate measurement of laser alignment tools in the X and Y axes. Recent tests by BIG Daishowa of high-speed spindles showed that many machines, while accurate at 500 rpm, had runout exceeding 0.001 " at 30,000 rpm.

Other influences on runout include taper-to-taper contact, and the angle of the collet and corresponding clamping range. (see sidebar on page 60).

What many shops believe is acceptable runout is actually unacceptable if the shop wants to improve tool life. A manufacturer basing toolholder purchase decisions solely on the price of the toolholder may end up choosing a more expensive alternative, based on tool life and cost per hole, while sacrificing quality and accuracy.