Spindles and tool holders are in a constant battle with the forces of nature, with this battle becoming more and more difficult with heavier cuts and longer projections. Chattering and deflection have always been the bane of machinists’ existence, so much so that the sight of a long and slender toolholder will immediately cause goosebumps.

If you understand why a long tool holder behaves the way it does, you’ll know that there are ways to fight back against this bending. Every machinist knows that short and stubby holders are more resistant to deflection than long and slender holders. You’ve also probably heard that, if possible, you’ll want most of your cutting forces to be axial rather than radial. Not only does this fight chatter in operations like boring, but your spindle also is better equipped to handle loads in this axis. However, these options aren’t always going to be on the table, especially in unavoidable long-reach situations and many milling operations.

In this constant battle with tool deflection, much time and effort has been spent designing shorter holders, stiffer tools, and clever anti-vibration geometry and materials. But oftentimes, the body diameter(s) of the holder can be overlooked as a means of increasing rigidity, especially in situations where it is all you have to work with. This is a serious shame, as you’ll soon discover.

The concept of dual-contact technology has been around for years, existing in many different forms but always with the same goal of capitalizing on this untapped potential of rigidity. For those who don’t know, dual contact refers to the shank contacting the spindle taper and the spindle face simultaneously. Oftentimes, the solution involved ex post facto alterations to the spindle or tool holder, such as using ground spacers or shims to close the gap, for example. In other words, there was no standard solution, and if you wanted dual contact, you would have to be prepared to spend time and money either buying modified tool holders or modifying them yourself to adapt them to your spindle.

BIG-PLUS emerged as a solution to this issue. Essentially, both the spindle and tool holder were ground to precise specifications so that they closed the gap between spindle face and flange in unison (while depending on very small elastic deformation in the spindle). What this meant is that operators were able to confidently switch BIG-PLUS tooling in and out of a BIG-PLUS spindle and achieve guaranteed dual contact. Not only that, but standard tooling could still be used in a BIG-PLUS spindle if necessary, and vice versa.

Though not technically an international standard, it’s been adopted by many machine tool builders because of the clear performance improvements and simplicity. In fact, BIG-PLUS spindles come standard on more machines than you would think. We often come across operators that have machines with BIG-PLUS spindles and don’t even realize it.

How exactly does dual contact help with tool rigidity? The torque (or moment) exerted by the cutting forces is maximized at the point where the holder and spindle meet, the base of the tool holder. With standard CAT40 tool holders, this would be the gage line diameter. When the holder contacts the spindle face via BIG-PLUS, the effective diameter would be the larger diameter of the v-flange, since this is the new anchoring point of the holder and spindle. So, you are beefing up the diameter at the point where the reactionary force is greatest.

It’s not too much of a leap to conclude that a larger effective diameter will give you more rigidity. That being said, you may still be asking yourself: does such a seemingly small increase in diameter really make a difference? To understand the effect of BIG-PLUS, you must understand the physics behind it.

Imagine a simple scenario in which a tool holder is represented by a cylindrical bar that is fixed at one end and free-floating at the other. In other words, a cantilever beam. If you think about it, this is essentially what a tool holder becomes once it’s secure in the spindle. Now, let’s introduce a radial force F that acts downward at the suspended end of the bar, which represents a cutting force you would encounter when milling or boring, for example. The bar, as you might expect, will want to bend downward. It’s similar to how a diving board bends when someone stands at the end, though less exaggerated.

It’s possible to predict the amount of deflection (or inversely, bending stiffness) at the end of this hypothetical bar if you know its length, diameter and material. The expression below represents the stiffness k at the end of the bar

where d=diameter, L=Length and E=Modulus of Elasticity (this depends on the bar material). The greater the value of k, the stiffer (or more rigid) our bar will be. I won’t ask you to do any math here, I just want you to look at the equation. We can see that increasing d will increase the value of k, while increasing L will decrease the value of k, since it’s in the denominator of the equation. This certainly makes sense if you think about it: a short and squat bar (large d, small L) will be more rigid than a long and slender bar (small d, large L).

Something interesting to note is that d is raised to the 4th power, while L is only raised to the 3rd power. Diameter affects rigidity an entire order of magnitude more than the length does. This is where the power of BIG-PLUS comes from and is why a small increase in diameter can have such a powerful effect on performance.

For a CAT40 tool holder, the gage line diameter is Ø44.45 mm and the flange diameter is Ø63.5 mm. Let’s imagine two bars of identical length and material, so L and E remain unchanged. One bar has a diameter of Ø44.45 mm (standard CAT40) and the other has Ø63.5 mm (BIG-PLUS CAT40). If you were to plug these values into the above equation for comparison, you would find that the BIG-PLUS holder results in a k value that is around 4 times greater than the standard bar. Based on this comparison, you could say that a BIG-PLUS holder is 4 times as rigid as an identical standard CAT40 holder, because it is 4 times as resistant to deflection. Think of the tool life and surface finish improvements you would see with a tool that is 4 times more rigid, not to mention the reduction in fretting and potential for reduced cycle time. You would get similar results if you were to make the same comparison for CAT50, BT40, BT30, etc.

If you’re still not convinced, we can also compare the rigidity in this way: Let’s say there is a Ø63.5 mm BIG-PLUS CAT40 bar of some arbitrary length. One of our more common gage lengths is 105 mm, or just over 4 inches, so let’s use it as an example.

You’re probably wondering, at what length would a comparable standard CAT40 holder have an equal stiffness? If we take our stiffness expression and set it equal to itself (one side representing BIG-PLUS, the other non BIG-PLUS), we can plug in this BIG-PLUS holder length and our known diameters to find our unknown non-BIG PLUS length:

What does this mean? A BIG-PLUS holder of around 4 inches or 105 mm in length will have equal rigidity to a standard CAT40 holder of around 2.5 inches or 65 mm in length. Any experienced machinist will know quite well the difference in rigidity between a 4-inch long holder and a 2.5-inch long holder. If this is true, we can say that implementing BIG-PLUS is equivalent to a 40% reduction in length in terms of rigidity. Theoretically, a BIG-PLUS tool holder will behave like a standard tool holder that is nearly half of its length!

Obviously, we’ve used simple and idealized cases here to represent the complicated and dynamic world of metal cutting. Tool holders, of course, don’t have uniform body diameters or materials and the cutting forces usually aren’t acting in one direction in a constant and predictable way. If our holder necks up and down to different body diameters along its length, which is realistically what happens, each of these sections would be its own microcosm of “beam” that would influence the overall behavior (at that point, finite element analysis on a computer becomes the only practical way to predict behavior).

So, will the advantage of BIG-PLUS really be as dramatic as our hand-calculated classical beam theory suggests? Probably not, but it depends on the tool holder/tool. Most cases will follow our simple model quite closely in practice; others not so much. If nothing else, we’ve demonstrated how dramatically the flange contact of BIG-PLUS can influence rigidity, at least in a purely mathematical sense.

As if you needed any more reasons to be on the BIG-PLUS bandwagon besides increased rigidity, you will also eliminate Z-axis movement at high speeds, improve ATC repeatability and decrease fretting. This means that you will take heavier cuts, scrap less parts, and increase tool and spindle life.

BIG-PLUS isn’t a new idea by any means, but with a proven track record of tackling tough jobs, it’s hard to imagine working in a modern machine shop and not taking advantage of what it has to offer.

Thanks for your comment. I'll forward this information along to your local team member to assist you. You'll hear from them soon. 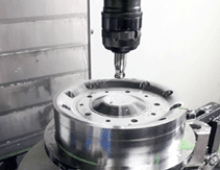 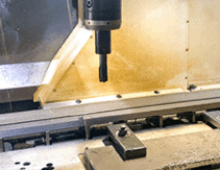 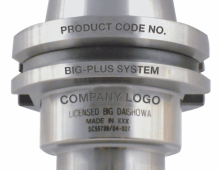 Apr 2022
Is Your Machine Spindle at Risk?
No matter what, a new machine represents a significant cost in a manufacturing project. This investment can be compromised if it is not tooled up properly.
Tool Holders 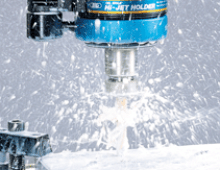 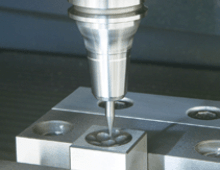 Mar 2022
The Case for Hydraulic Chucks [5 Benefits]
If your work demands accuracy or you are looking to give your 5-axis capabilities a boost, hydraulic chucks are worth considering.
Tool Holders 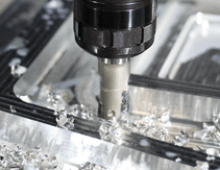 Dec 2021
Tools to Succeed in High-Speed Machining
Machining at higher speeds can save time and money, however, increasing the speed also means increasing the inherent risk in the situation. To maximize speed potential, a holistic approach that considers tool, holder, machine and operator is essential.
Tool Holders 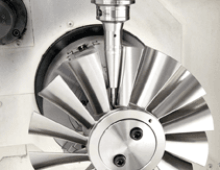 Nov 2021
How the Right Tool Holder Can Extend Tool Life
If you’re looking for fast, easy return on investment, improving tool life is one of the best options a metalworking operation has.
Tool Holders 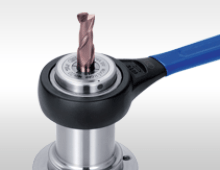 Nov 2020
Don’t Cheat When Tightening Tool Holders
Cheater bars are appropriately named, especially when it comes to tightening tool holders. We see the common pipes that are often added to the end of wrenches to achieve more torque in customers’ shops all the time. And while these makeshift wrenches may make tightening or loosening holders easier, the damage they can cause is often overlooked.
Tool Holders 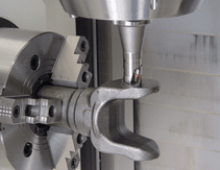 Nov 2020
Creative Tooling Combinations Supercharge 5-axis Roughing
Five-axis roughing can be painstaking. Pairing the right holder with the right cutter can save serious time while cutting and when setting up -- and eliminate those pain points.
Tool Holders
Cutting Tools 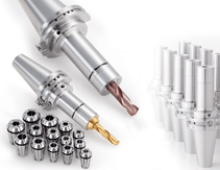 Nov 2020
How the Right Tool Holder Cuts Carbide Costs
As a raw material, tungsten carbide is a limited natural resource and a widely popular tool material due to its hardness and heat resistance. We can both save money by reducing the consumption of carbide and help our environment by fully utilizing every tool before recycling the rest.
Tool Holders 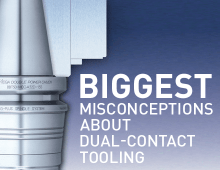 Sep 2020
Biggest Misconceptions about Dual-Contact Tooling
Because of the popularity of BIG-PLUS, many tooling companies, without a proper license, offer what they call dual-contact tooling. But not all dual-contact is the same. Let’s tackle a few of the most common misconceptions. 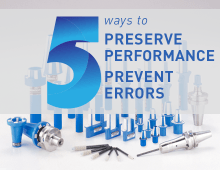 Aug 2020
5 Ways to Preserve Tool Holder Performance and Prevent Part Errors
Everyone wants to get the most out of their tool holders. While some may take a set it and forget it approach with holders, it’s not recommended, as they have a direct impact on both parts and machinery. Here are some tips to ensure your holders deliver.