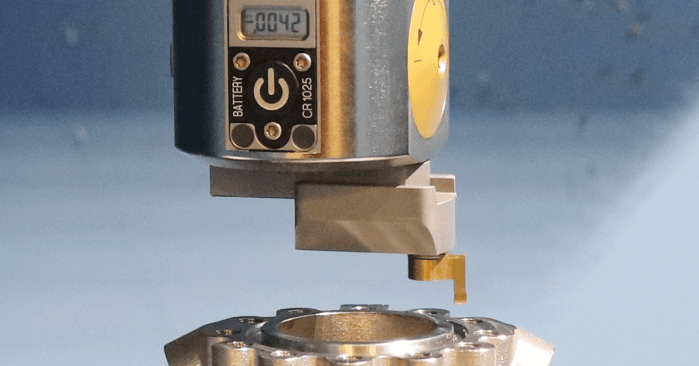 When you’re a manufacturing facility with a lot of in-house 3D printing capabilities, you have to think about things differently: materials and how they are sourced; the cost of scrap; process sequencing and engineering, talent distribution. The list goes on and on. The result is a vertically integrated operation that accounts for each and every feature, and how their processes impact what happens before and what happens after. With more than 31 additive machines and CNC machines with pallet changers everywhere, Keselowski Advanced Manufacturing (KAM) is just that kind of company.

“Vertical integration is key,” James O’Toole, VP of engineering and sales, said. “The additive, subtractive and quality sides collaborate so tightly, acting as an integrated project team, that we can make smart concessions and decisions in one area of the process and manage the impacts on others.” 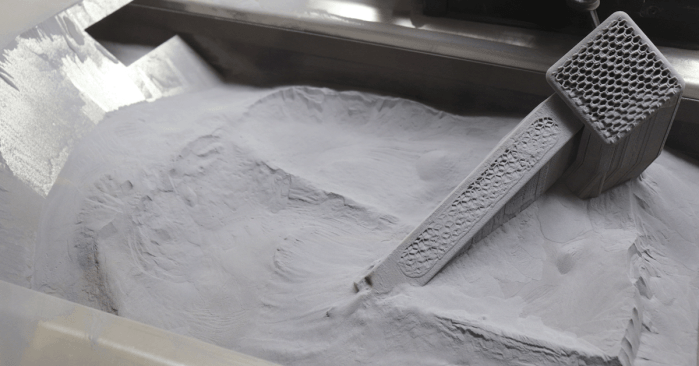 Whereas traditional shops would machine from billet, KAM can build a part via Laser Powder bed fusion methods otherwise known as metal 3D printing. They print near net shapes with finish machining in mind—fixturing, approach angles, specifically demanding features and the like. This is a huge advantage for O’Toole and his team; anything helps when working with some of the most difficult alloys on the planet, including AlSi10Mg, 6061RAM2%, Inconel 625 and 718, Ti64 and Haynes 282.

While the KAM team is very good at adjusting processes and factoring up and downstream impacts, it’s no small feat to change a process once it is producing, especially with these alloys. There must be some value to be found as a result.

“First-time yield is a key factor in our success,” O’Toole said. “Anytime you’re implementing a new process there’s always a bit of heartburn, because you’re saying, in order to validate a process we need to try it. If that doesn’t work, the cost is tens of thousands of dollars and hours of recovery time.”

Despite the risk, a particular sealing groove feature on a turbo pump assembly recently presented an improvement opportunity KAM couldn’t pass up. Looking at their CAD programming tree, this one, relatively small feature accounted for 30 percent of their program.

“This grooving component was typically the longest portion of the cycle time,” said O’Toole. “Cycle time is where we can make the biggest impact. We’re not searching for seconds, we’re searching for half an hour, 45 minutes.”

Though small, the feature is undeniably demanding. Turbo pumps for aerospace, motorsports and defense customers are about as high-heat of a setting as parts can be deployed. Where O-rings might work to seal a groove in less extreme temperatures, they’ll fail in high heat. Tolerances need to be tight enough to serve as a seal; surface finishes between 4 and 16 RA are not uncommon and most require a circumferential lay. 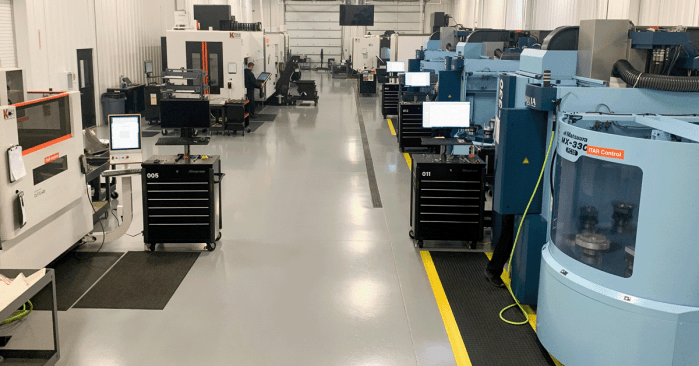 The team’s original approach to this feature consumed two .093" carbide end mills, one for the roughing and one for finishing. These high-nickel metals have high ductility and malleability, but they are also very abrasive. O’Toole described it, “Almost like cutting sandpaper.” And this limited feed rates to about 100 SFM and cutting speeds of less than 10 inches per minute.

“Because of the amount of time it was taking to cut that groove and the amount of wear that was on the tool, we were essentially having to change the end mills every part,” O’Toole explained. “We were having to resize almost every part. There was constant remeasuring of the slot width and comping out tools. It was taking almost an hour to rough and finish with all the stopping and starting.” There was also an element of post polishing to achieve the circumferential lay, based on the method used to produce the feature.

The time and carbide cost were too much. The whole team hit pause on the already-defined, working process. O’Toole set out to find a way to cut the number of adjustments, speed up feed rates and get more out of their tools. Having their equipment already involved in the process, BIG DAISHOWA Inc. was O’Toole’s first call.

After consultation, the case for a combination of a new face grooving attachment, the two BIG KAISER EWD Digital Boring Heads from BIG DAISHOWA already in use was strong enough to invest in a test. The idea was to extend the tools’ effective diameter so it didn’t have to spin as fast. This would lead to fewer, finer adjustments and make the digital heads even more valuable time savers. The test proved the theory, and the new approach was implemented right away in coordination with the other departments.

“The face grooving tool swings in a 2.087-inch diameter arc, much larger than the end mill,” O’Toole explained. “Abrasion is so difficult to deal with, being able to change where that surface speed calculation is done, really provides a big benefit to the overall operations.

“Because of the way the feed rate is established on the down feed, meaning we're feeding it into the part at a specific feed rate, rather than moving in a circular motion along that two-inch tool path - it's hard to even compare to how we were doing it before. We’re talking about taking more than 45 minutes out of an operation.” 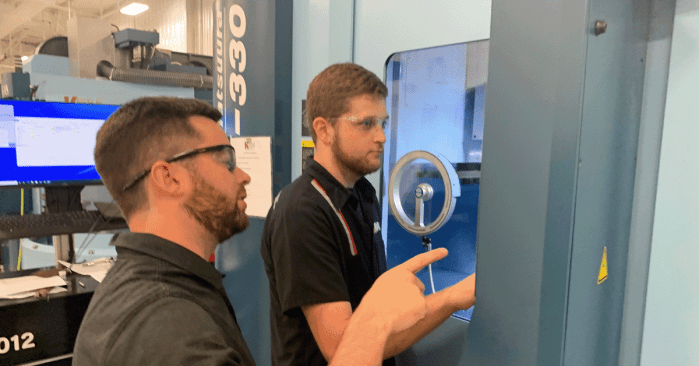 Now, any adjustments that are made are very finite, making the digital readout on the boring head even more valuable than before. And, because the tool cuts more efficiently and spends less time in the cut, they can go 5-10 parts without even needing to make an adjustment, let alone a replacement.

What’s more, the relatively minor adjustment has even made the team comfortable enough to include the process in its lights-out schedule. “The goal is to maximize throughput, not just when we’re on site, but also when we’re not,” O’Toole said. “So, coming up with a repeatable process where we’re not having to chase dimensions repeatedly got us to a point where we felt confident leaving the parts overnight.”

That’s a lot of confidence, considering the dozens of hours that go into printing a part and the fact that machining is the last stop on the value chain. 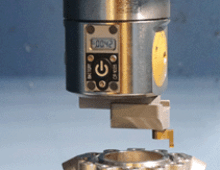 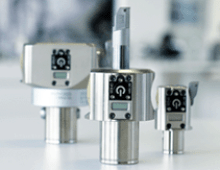 Nov 2022
Everything You Need to Know About Digital Boring Heads
Over the last couple of decades, digitization has increasingly crept into our lives. In the metalworking world it’s undeniable. Digital boring heads have emerged as indispensable time-saving and quality-ensuring tools in machine shops.
Boring Tools 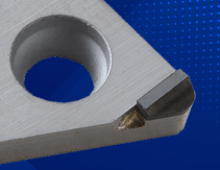 Jan 2022
Q&A: Choosing Between PCD and CBN Inserts
While we specialize in holders, we do offer some specialized cutters with these materials and often get questions about PCD and CBN inserts. Here we tackle some of the most frequently asked questions.
Boring Tools 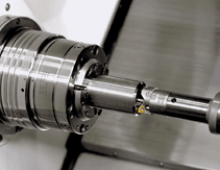 Dec 2021
A More Efficient Alternative to Rough Boring on a CNC Lathe
ID boring is a common and time-consuming operation on CNC lathes. Common issues have led to the development of world-class boring tools—traditionally used on milling machines—that have proven to be just as effective on a CNC lathe. 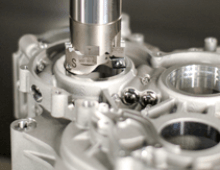 Oct 2021
Answering Tricky Boring Tool Questions
There’s more than one way to make holes, but some approaches are better than others. Working with customers from across every industry, our team gets to see what works and what doesn’t. These are a few of the interesting questions—and unexpected answers.
Boring Tools 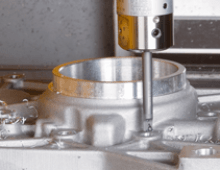 Jul 2021
Troubleshooting for Fine Boring
Fine boring heads provide high-precision finishing options for many applications, however, fine boring can be a delicate operation that can go awry. Check out these troubleshooting tips.
Boring Tools 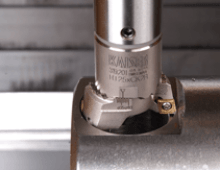 Jul 2021
Troubleshooting for Rough Boring
Even the most well-planned boring process may not achieve the desired result. We’ve provided solutions to common rough boring problems to help get you back on the road to productivity.
Boring Tools 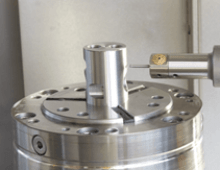 Apr 2021
Ask the Expert: 5 Questions for Boring in Aerospace
When it comes to aerospace components, the slightest imperfection could be catastrophic. Our experts answer five questions about boring precision holes on aerospace parts.
Boring Tools 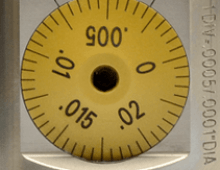 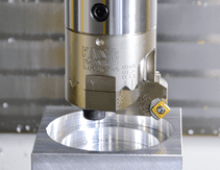 Jan 2021
10 Reasons Twin Boring is Better for Holemaking than Helical Interpolation
Anyone who’s made holes understands the difficulties that can arise: vibration, wander and even breakage. When it comes to production-level volume, these issues become even more limiting. Many turn to helical interpolation with a mill as a reliable way to rough out holes. We’re here to tell you there’s a faster, easier option.
Boring Tools 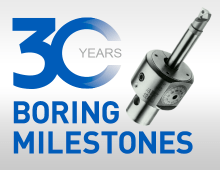 Dec 2020
30 Years of Boring Milestones
As we close out 2020, and our 30th anniversary celebration, we take one last look back at BIG KAISER’s role in the evolution of boring tools.
Boring Tools